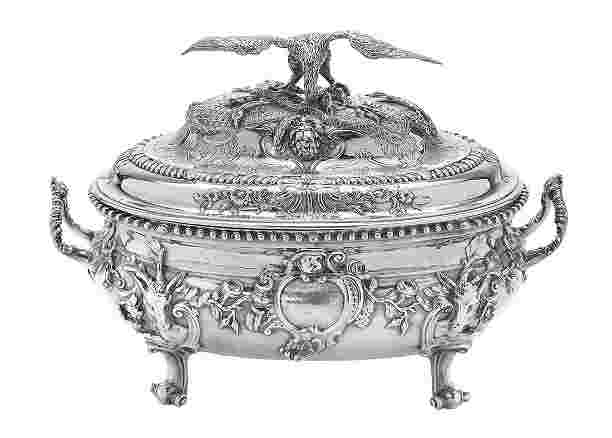 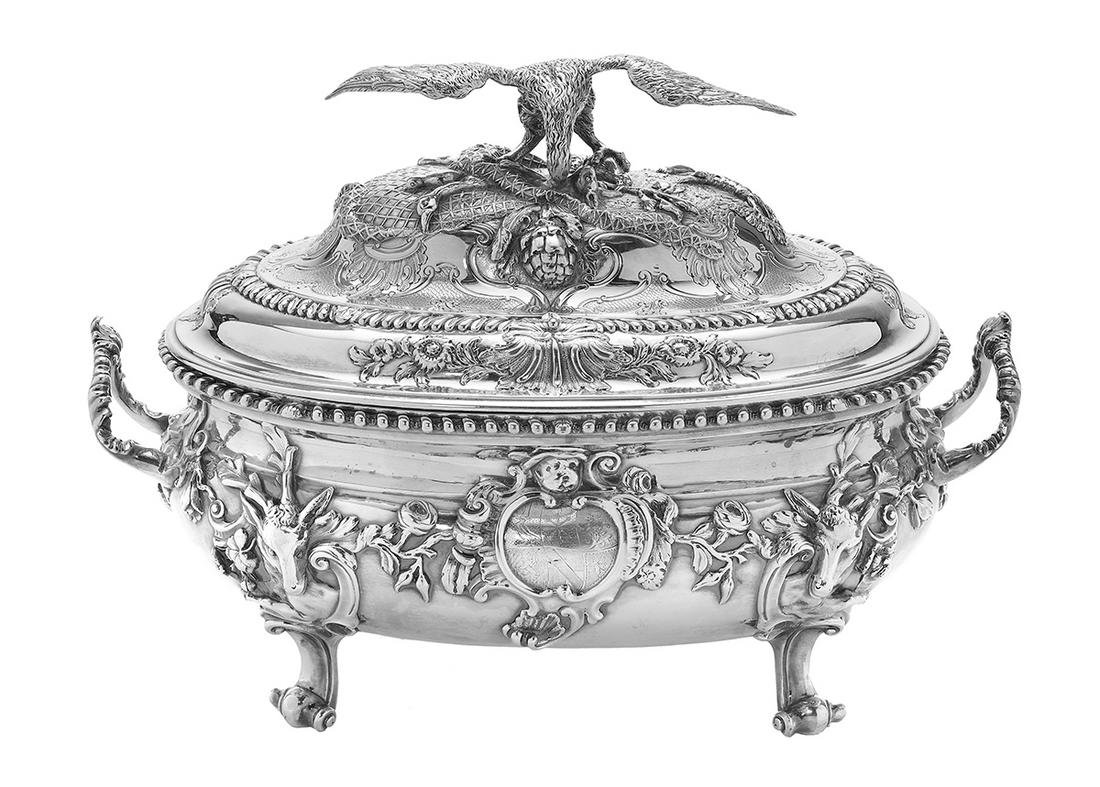 hallmarked London, 1752-1753, by Charles Frederick Kaendler (1712-1778), of oval form, the body decorated with a side band of applied rose garlands connecting opposing putto masque-crested rococo cartouches, scroll-mounted gadrooned stirrup handles and four stag-masque-crested scroll feet, the fitted, domed lid decorated with a gadrooned band with floral-mantled acanthus scrolls and surmounted by a dramatic scene of a large eagle which has seized the net of a hunter and is seizing the hare and fowl within, with gathered vegetables strewn about, fitted with a silverplate liner and engraved on the cartouches with an armorial with six quarterings, among them Astley, Corbet, Apifer and Gray.
h. 9-3/4", l. 14", w. 9-1/4"; 109.70 t. oz.
h. 10", l. 14", w. 9-1/4"; 109.70 total t. oz. (excluding liner)

Notes: The work of silversmith Charles Frederick Kandler has been known for centuries for its fine quality modeling and extravagant rococo detail, but his identity remained a mystery until the late 20th century, when he was discovered to be not one but two men: German brothers Charles and Charles Frederick Kandler.
They were born Carl Rudolf Kaendler (baptized March 5, 1695) and Carl Friedrich Kaendler (baptized April 20, 1712) in Fischbach, Saxony, near Dresden, the sons of Lutheran pastor Johann Joachim Kaendler (1655-1736) and his wife Johanna Salome. The elder brother was apprenticed to Dresden court silversmith Johann Jacob Irminger in 1710. (Around this time, Irminger was commanded by Augustus, King of Saxony to supply designs for the porcelain factory in the royal castle of the Albrechtsburg in Meissen. Ten years later, another Kaendler brother, Johann Joachim Kaendler (1706-1775), was apprenticed to sculptor and carver Benjamin Thomae (1682-1781); he would go on to become the most important modeler at Meissen and perhaps in all of 18th-century Europe.)
The elder Kaendler, assuming he served a standard seven-year apprenticeship with customary journeyman period, probably completed his training around 1725, which coincides neatly with the registration of the silver mark of one "Charles Kandler . . . in St. Marten's Lein" [sic] on August 29, 1727 in London Goldsmith's Hall. He was in partnership with James Murray, who died two months later, whereupon Kandler registered a mark in his own name. Kandler's shop created some of the most important and extravagant silver pieces of the era, including the extraordinary 1734 Jernegan Wine Cistern, now conserved in the Hermitage in St. Petersburg and widely considered to be the largest extant piece of antique silver in the world.
This piece was one of the elder Kandler's last, for on September 10, 1735 a new set of marks was entered in Goldsmith's Hall for "Mr. Charles Frederick Kandler". This was for many years assumed to be the elder Charles, but it is now known to be the younger Carl Friedrich, who probably traveled to England with and was trained by his brother. As there is no burial record, will or other evidence of the death of Charles the elder, but all records after late 1735 seem to refer to Charles Frederick, it is assumed that Charles returned to Germany, perhaps because of the death of his father around that time.
Charles Frederick quickly took on a number of apprentices, and the output of his workshop continued to be of the highest quality, such as the fine floral and figural candelabrum in the Ashmolean Museum (later copied by Paul deLamerie). Charles Frederick Kaendler marked twice, and had but one surviving son, Charles (1737-1807), who continued the family workshop until his death.

In good condition with no dents, breaks or repairs noted, and no issues beyond the expected patina of age, including wear to the details in relief and scattered scuffs, dings and nicks. Hatching on the armorials is worn but discernible. Hallmarked (on the underside and the lid sleeve) with: 1) the sterling lion passant; 2) the London crowned leopard's head; 3) the date letter "r" for 1752-1753; and 4) the "FK" with fleur-de- lys maker's mark of Charles Frederick Kaendler. Marks on the sleeve good, with some friction wear; those on the underside worn but discernible. Additionally engraved "1752." on the underside, presumably at a later date. The fused plate liner in good condition, also probably of later (but not recent) date; marked "H.R". The Willson/Bedford bill of sale yellowed, with faded ink, one missing area of typescript (from cellotape?), and losses and tears to the fold lines repaired with washi kozo paper.