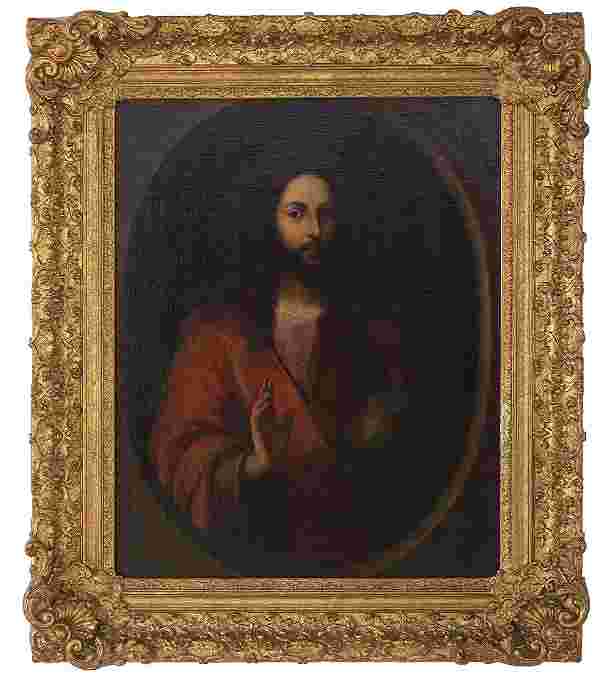 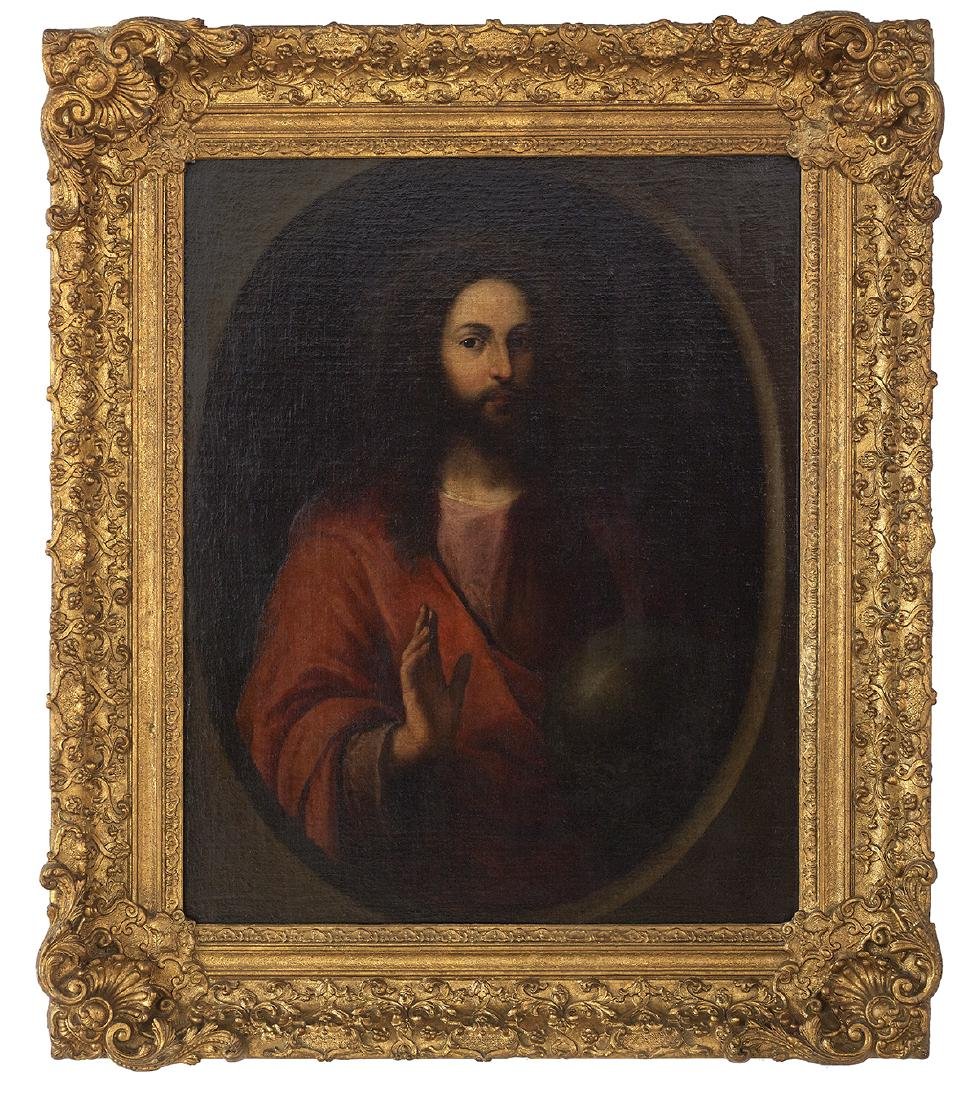 "Christ as Savior of the World"

oil on canvas
unsigned; accompanied by a letter from Frederick B. Anthon, restorer for the Los Angeles County Museum, dated 1962, attributing the work to Juan de Valdes-Leal for a donation to the Immaculate Heart School.
Framed.

Notes: This fine portrait is more closely associated with the work of Bartolome Esteban Murillo than with his contemporary and close associate Juan de Valdes Leal, even though the influence of both is present. In 1962, Frederick Anthon, head conservator for the Los Angeles County Museum (LACMA) restored cleaned and attributed this work to Valdes Leal in his letter of donation to the Immaculate Heart School without clarifying why. Was the attribution made prior to his handling of it? Was it stylistically different enough to support the hand of his colleague or one of their students?

Both Murillo and Valdes Leal were from Seville, a major 17th-century port with a bustling art scene that exposed the young artists to the Flemish and Venetian masters. Both artists apprenticed under the same family- Murillo with Juan del Castillo in Seville and Valdes Leal with his nephew Antonio in Cordoba. Both were instructed in the style of Zurbaran and Velazquez. Their works continued to overlap throughout their careers- they collaborated on and/or competed against each other for Church commissions and co-founded the Seville Academy of Fine Art with Franciso de Herrera el Mozo in 1656.

Though they drew upon the same corpus of work, stylistically they differ. Valdes Leal focused on the lives of Saints and redefined the Dutch vanitas into somber, even macabre, Spanish Catholic martyr scenes with memento mori that advocated "finis gloriae mundi" (end of world glories). Valdes Leal's paintings are typically more Spanish with greater influence drawn from Zubaran's dramatic lighting and the elongated tortuous bodies, redolent of El Greco. Furthermore, the focus is rarely on the psychology or the humanism of the subjects/saints, but rather their sacrifice/martyrdom for the greater good of Christendom.

While the saturation of the red robe and the extreme use of chiaroscuro and tenebrism (that spotlight the right side of Christ's face against a near featureless background in this painting) are characteristic of the lasting influence Zubaran had on Valdes Leal's oeuvre, the soft luminosity and modelling of the face engenders a humanistic focus on Christ more indicative of Murillo, and the numerous depictions he executed of "Christ, Savior of the World" (with the orb and raised hand), better known in Latin as "Salvator Mundi".

According to the Getty Provenance Index Search, twenty-two depictions of "Salvator Mundi" by "Murillo" were sold at auction between 1771 and 1839. This painting resembles the following descriptions: the 1771 sale by Skinner and Dyke of works from the collection of Charles Alexandre de Calonne (though no measurements were given); and the lengthy description of the "Salvator Mundi" from the catalogue of Charles O'Neil, Esq. that sold through Foster in 1834 (though the measurements do not match). The depiction of Christ in this lot is characteristic of Murillo's depictions of Christ, notably "St. John the Baptist Pointing to Christ", 1655, (conserved in the Art Institute of Chicago), and the study for that painting, "Head of Christ", which sold at Sotheby's, New York, January, 26, 2006, lot 299. See also "Christ Carrying the Cross", (LAM) no. 575, in Diego Angulo Iniguez, Murillo (1982), of which a copy (from the Circle of Murillo) was sold through Humrich Fine Art. In each of these works Christ is distinctly portrayed with the same the ovoid shaped head, prominent forehead, deep set round dark eyes and narrow aquiline nose that slightly hooks the tip/columella over the nostril. Murillo also employed similar oval formats in his paintings and similar sized canvases.

As these works clearly demonstrate, particularly the Humrich, this painting is from the circle of Murillo and belongs to same canon of Spanish Baroque art that Murillo and Valdes Leal created together in Seville.

Painting exhibits signs of past professional restoration. Some time ago, the painting was cut and relined with taped edges, which are faintly visible at frame edges. Multiple layers of varnish, many of which were unevenly applied (streaked), obscure the UV light from fully penetrating the painted surface. There are two old repairs from before it was relined with an ~3" area of inpainting to the armpit/shoulder area of Christ's proper right arm and an ~3" area to the cloak to the lower right of Christ's raised hand. Under UV light, a horizontal line across Christ's proper right upper arm fluoresces - which is indicative of either another older repair or the seamline from the original canvas. There are some tiny losses and abrading along edges. Painting exhibits some craquelure, surface soiling and yellowing of varnish layers. In overall good condition. Condition is commensurate with age and material.